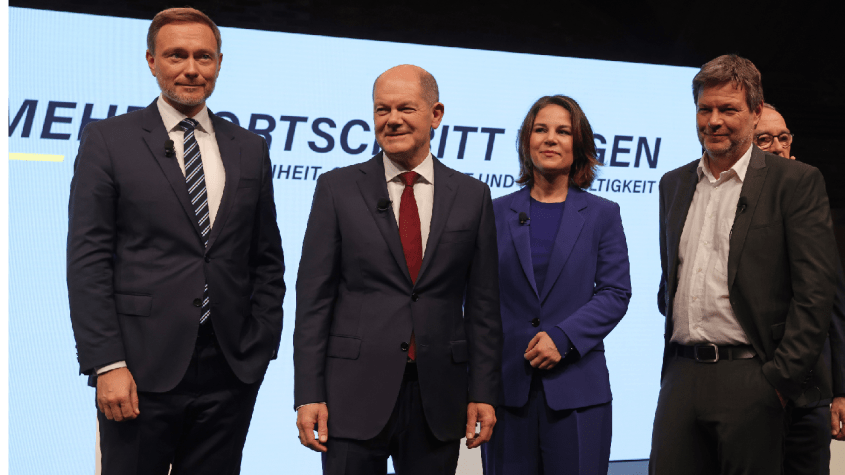 After only two months of negotiations, – something the Dutch could learn from 😉 – the incoming German chancellor from the centre-left Social Democrats, presented the agreement with the Greens and the pro-business Free Democrats. The new alliance will start a new era after 16 years of consecutive conservative-led governments. The three parties,  SPD, the Greens and FDP, have never governed Germany together before and are likely to bring a positive change to the country, according to their ambitious plans explained down below.

The accord includes ambitious targets for expanding renewable energy capacity, including a commitment to allocate 2% of land in Germany to renewable energies, such as wind farms!

We listed the most important points of the coalition agreement:

The points in the agreement seem kind of ambitious, which means the three parties have to come up with strong and daring plans to get to their goals. According to the economic research institute DIW, Germany will have to build 8400 football fields full of solar panels and 1200 windmills a year in order to achieve their goal to close all nuclear power plants in 2030. To make sure climate will become a priority for society, the new government will install a climate check for all new bills. Meaning that in each new bill, the responsible minister has to make sure there is also a written passage on how the bill will contribute to the climate goals.

Right now, the agreement has been sent out to the other party members in the coalition for reading and eventual changes. If all parties approve, they will be done in time to have Scholz elected as chancellor on December 6, just days before Merkel would overtake Helmut Kohl to become the country’s longest-serving post-war chancellor on December 17.

Looking at the new goals that are set for the coming years in Germany, we feel like they reflect perfectly that you have to be ambitious in order to get to a greener and more sustainable future. We think that the Netherlands could learn from the German agreement  and use it as an example to get to zero emissions as soon as we can.